Enjoy The Conditions Of Omar

"Today in the West the Conditions of Omar are most apparent in the constant flattery of Islam by western leaders whilst more and more Muslims are openly hostile to our communities. And, with the creeping imposition of Islamic laws, customs, and values across the world, the Conditions are being established on a global scale."


The relationship that the Conditions set up has the following characteristics:

• Dhimmis therefore lived in a state of permanent vulnerability and fear. Each dhimmi and the dhimmi community as a whole faced a perpetual concern lest anyone breached the Conditions and brought about catastrophe

Other than paying the non-Muslim poll tax or jizyah what conditions had to be kept?

Dhimmis were forbidden from:

• Criticizing or mocking Islam or Muhammad. Only praise for Islam and Muhammad was allowed
• Criticizing the Conditions of Omar: the very conditions of subjugation under which they lived
• Testifying against a Muslim in court
• Studying Islam - thus keeping them ignorant of its teachings
• Cursing a Muslim
• Raising a hand against a Muslim, even in self-defense, on pain of having it amputated
• Displaying their religious symbols

These are only a sample of the Conditions, chosen to highlight why they are relevant today – which I will come to later. There were geographical and historical variants on the Conditions but they all held to the same theme – the humiliation and subjugation of non-Muslims and the maintenance of multiple forms of discrimination against them.

The Conditions also worked in conjunction with each other. For example, if a Muslim accused a Christian of a capital offence, such as trying to convert a Muslim, the Christians’ own testimony was not valid in their defence.

Dhimmis were ‘protected’ as long as they met the Conditions. If a dhimmi community (or any member of it) broke the Conditions it was the duty of the local Muslim community to restart the jihad against them.


A key outcome of this scenario is the desire of non-Muslims to avoid confrontations with Muslims and to police one another to prevent deviant individuals destroying the ‘protection’ of the Conditions.

Pakistan is a Muslim country where the Conditions of Omar are operating to some degree today. In March 2013, because one Christian was accused of blasphemy, some 3,000 Muslims attacked the Christian Joseph Colony of Lahore, burning two churches and 160 Christian homes.

In 2009 in Gojra, eight Christians were burned alive, 100 houses looted and 50 homes set ablaze after another blasphemy accusation.

May 5th 2014, Bangladesh, a 3,000 strong Muslim mob attacked Hindu households and a temple after two youths were alleged to have slandered the ‘prophet’ Muhammad on Facebook.

These are just a few examples to show how the Conditions are applied in practise and that they are still active today. Islam as a body of belief has never discarded them and never will because, realistically, it can’t. You can read many more examples of the Conditions in action today if you look up Raymond Ibrahim’s Bulletin of Christian Persecution online. His book, "Crucified Again: Exposing Islam's New War on Christianity" is also very informative.

You might like to believe that the application of Islamic law or Sharia is receding. It isn’t. Over the last 60 years Sharia worldwide has been extending and intensifying. See here.

And that brings us to the here and now.

Muslim minorities in non-Muslim countries have brought Sharia with them. The Conditions of Omar are simply a subset of Sharia which sets out how Muslims should deal with non-Muslims under conquest.

You might well say that what Muslims do to Hindus or Christians or other non-Muslims in Bangladesh or Pakistan is none of our business. That is called the death of conscience.

You might well say that we have not been conquered. That is only partly true. A process of conquest is underway.

One of the subtle ways we are surrendering to the Conditions is by policing what non-Muslims can say about Islam and Muslims. See this example.

Anyone living among Muslims today knows that being openly critical of Islam or Muhammad is risky. Plenty of examples have set the precedent: in 2004 Theo van Gogh was murdered for making a film critical of Islamic attitudes to women; in 1989 Salman Rushdie was forced into hiding after writing The Satanic Verses, his Japanese translator was murdered; in 2004 the Danish cartoons episode erupted in which 162 people around the world were killed during protests, again demonstrating how some Muslims will kill people totally unrelated to the ‘offence'.

These are a small selection but they point to 2 clear principles: (1) the author of something considered critical of Islam is liable to be killed; (2) anyone can be killed in revenge against the non-Muslim world. Both of these conform to rules set out in the Conditions.

As a result of such actions and threats most publications refused to print the cartoons. Public figures came to the defence of a religion they knew nothing about. Those seeking to rock the boat further by printing the cartoons became the targets of condemnation rather than the Muslims threatening violence.

Again, this conforms to the Conditions and the behaviour of dhimmi populations who feel vulnerable and threatened. The dhimmi populations turn to self-policing in order to prevent deviant individuals triggering violence from Muslims. This strategy buys into the idea that it's entirely up to non-Muslims to refrain from behaviour which upsets Muslims – a dhimmi outlook.

The principle has become established that non-Muslims should not confront Muslims about their behaviour or their beliefs. Only praise of Islam is allowed. This is submission – especially in view of the fact that Islamic beliefs call for the conquest and subjugation of non-Muslims.

In the UK and many European countries legal measures have also been put in place to suppress critical voices about Islam. The Race and Religious Hatred Act 2006 makes it an offence carrying a 2 year prison term for: “A person who uses threatening words or behaviour, or displays any written material which is threatening... if he intends thereby to stir up religious hatred.”

Now how do you prove intent here? Is trying to warn one’s fellow citizens about the divisive and supremacist nature of a religion the same as stirring up hatred against followers of that religion? If so, there is no way to reasonably warn against such a religion. And who would benefit from that? …Not the intended victims, obviously.

Make no mistake; this is happening around you now. Paul Weston, a prospective Member of the European Parliament, was arrested outside the Guildhall, Winchester on April 26th 2014 for quoting Winston Churchill’s damning assessment of Islam. He was charged under the terms of the Race and Religious Hatred Act 2006 for racially and religiously aggravated harassment.

The incident described above is yet another example of the dhimmi relationship in action. Behind all the waffle about discrimination and protecting minorities there is something which explains all the rationalisation taking place: fear. Fear of Muslim violence directed at anyone and everyone for offences against Islam.

You will find the word ‘Islamophobia’ used to describe those who are critical of Islam. What does it mean?

It doesn’t really mean anything; it’s designed as an intimidating word to enforce dhimmi behaviour. It carries a cocktail of messages which have certain key aims:

I have tried to give you some understanding of what the Conditions of Omar are, how they are applied in Muslim controlled countries, and how they are being established in non-Muslim countries.

Why on earth should you enjoy the Conditions of Omar?

Given the reluctance of most people to face anything unpleasant, the invitation to enjoy is simply an enticement to get your attention. But it is also more than this.

The 20th century Muslim theorist Syed Qtub said that the only freedom that should be supported was the ‘freedom’ to choose Islam. Non-Muslims under the Conditions of Omar would be gradually stripped of their freedoms so that they were left with only one: the freedom to choose Islam. He said, with a completely straight face, that non-Muslims should enjoy this erosion of their freedoms.

Also, in today’s climate only praise of Islam is allowed. The statement is an expression of what it seeks to change. It’s meant ironically.

The statement is also designed to arouse your curiosity but to do so in a way that cannot be construed as ‘hate speech’. It is positive in mood, though the irony becomes clear later. It is in itself inoffensive but it carries an important message.

The Conditions create a system of gradual enslavement and what the system most needs to succeed right now is your ignorance and silence about Islam.

Finally, you can enjoy the Conditions of Omar by resisting them. Open your eyes to where we are and accept that this is your place in history and do what is right. Many of those in the Greatest Generation who fought Nazism felt it was the best part of their lives. All non-Muslims now have the opportunity to fight for their cultures and their civilisations.

Fighting great evils puts us in a different moral space; we learn more about real human values like courage, truth, and goodness. By standing up to barbarism in defence of higher values we become minor heroes.

Even now, when Muslims are unleashing huge persecution against Christians and other non-Muslims, there is a reticence and dread of offending. There is a posture of apologising and appeasement, of trying to identify what it is in ourselves that is displeasing. All the while the driving force of jihad is ignored.

In the face of such obvious evil, is wearing a badge saying “Enjoy The Conditions Of Omar” too much to ask? By so doing you will act as a signpost that directs others to this webpage. 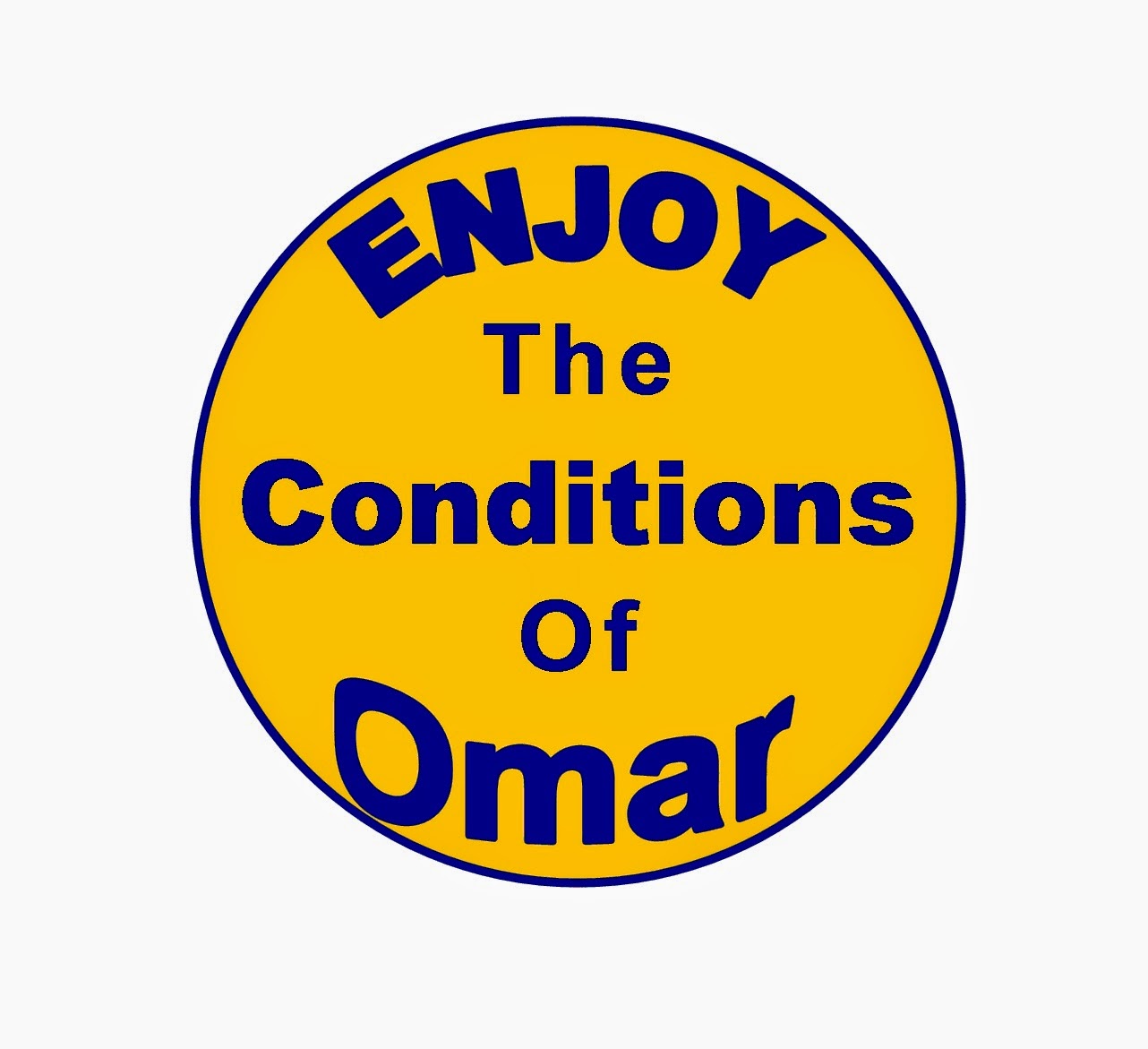 For your badge you can use our online SHOP or you can right click on the image above and select "Save image as" and save it to a location on your computer. You can then send it to any online maker of button badges. If you have the equipment you can even make them yourself.

So, what's the point?

And lastly, there is only one thing left to say to those who refuse to heed the warning: Enjoy the conditions of Omar.


Resources to help you


Your first battle is to reduce your own ignorance and to clear a path through all the misinformation being spread to mislead you.  You can do this very easily by studying the many good resources available to you online. Here are a few:


Mark Durie – The Third Choice: Islam, Dhimmitude, and Freedom, This will help you understand the worldview created by Islam, the way Islamic doctrine works as a comprehensive system, and how it has affected non-Muslims throughout its 1400 year history


Robert Spencer – The Truth about Muhammad. This will help you understand the character of Islam’s founder and how Islam itself so closely reflects his character.


Read the Koran. You will soon get to see the tenor of it, with its constant denunciations of nonbelievers and the terrors awaiting them .

The Centre for the Study of Political Islam has a series of books that are particularly helpful.


Read the biography of Muhammad known as the Sira. This will show you what the primary Islamic sources say about the ‘perfect model of conduct’.

Once you have attended to your own ignorance your next battle is to break the great silence in whatever way you can. If all you feel able to do is wear a badge saying “Enjoy The Conditions Of Omar” that is a lot more than most of your sleeping contemporaries, and it will point more people to the truth about Islam and its project of universal submission.
Posted by Greg Hamilton

The Conditions of Omar in Action

Two locations with the same brand of bigotry Punjab and Bradford, England 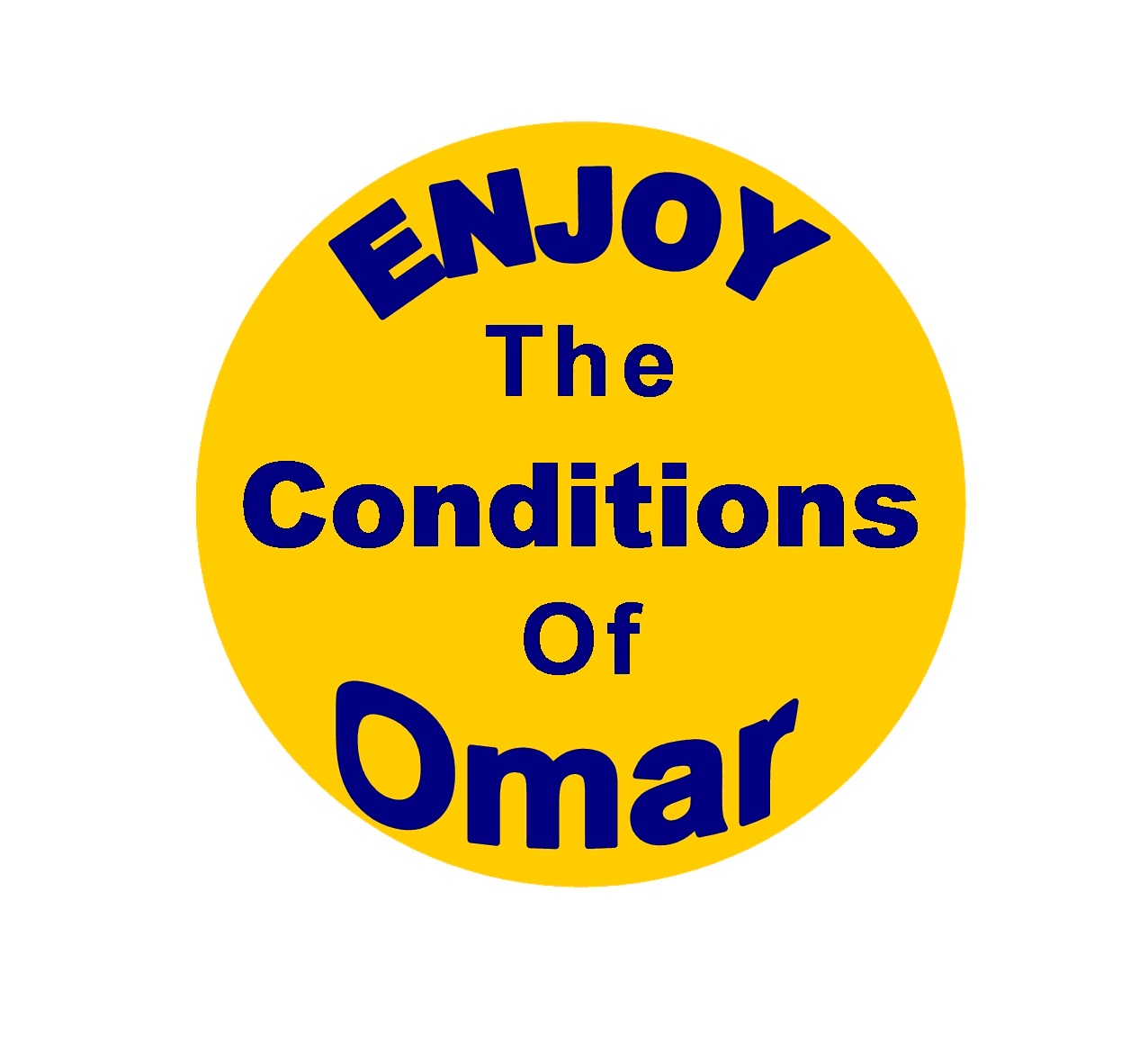 Combating the Conditions of Omar